Wireless sensor networks have been widely used in military defense, industrial and agricultural control, environmental monitoring, biomedicine, emergency rescue and other fields due to their low power consumption, low cost, distributed and self-organizing characteristics. Generally, a wireless sensor network consists of hundreds or thousands of sensor nodes, each of which has the ability to perceive the current environment, communicate with neighboring nodes through broadcasting, and perform local calculations on the collected information. However, these capabilities are very limited for each node, especially the node's energy limitation severely limits the life cycle of the network, thereby affecting the network's service quality and further applications. Therefore, in recent years, many researchers have conducted a lot of research on the energy saving aspects of wireless sensor networks, from congestion control to data compression, from sleep scheduling to topology control. The goal is to save as much energy as possible and maximize the network life cycle.

Wireless sensor network topology control consists of two parts, namely topology construction and topology maintenance. Once the initial network optimization topology is established, the network begins to perform the tasks it specifies. Since every behavior included in the network task, such as sensing, data processing, and transmission, consume energy, over time, the current network topology is no longer in the optimal operating state, so it needs to be maintained to maintain Remain optimal or close to optimal state. 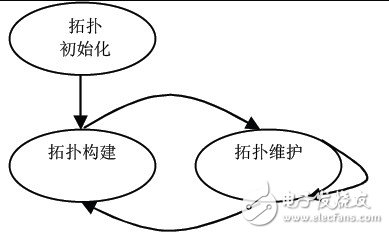 Topology maintenance is the same as other sensor network technologies, and its main purpose is to extend the life cycle of the network. In addition, sensor networks are constructed to perform certain tasks, such as performing sensing and transmitting sensory data, so one or more quality of service goals such as maintaining sensor coverage and maintaining network connectivity are also commonly considered. 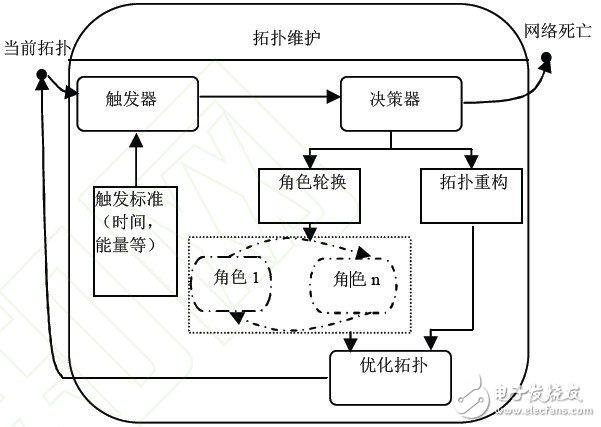 As can be seen from the above figure, each topology maintenance cycle is via triggers and decision makers.

Next, the model will be described in detail.

The trigger is responsible for periodically triggering the maintenance process of the current network topology, which has an important impact on the performance of topology maintenance. Because if triggered in advance, unnecessary energy will be consumed due to frequent running of topology maintenance protocols or algorithms, and delayed triggering will cause the network to run in a sub-optimal or even disconnected state, reducing or even failing to achieve the quality of service of the network. Common triggering standards are:

Time: Topology maintenance is triggered after the network runs for a period of time. The size of this time is usually fixed and predefined, and is usually completed by a timer.

SPAN triggers the update process of the coordinator nodes in the network based on time, so as to realize the topology maintenance of the backbone network.

In the topology maintenance strategy based on role rotation, we must first clarify the role that each node in the network can play. The role migration of each node is closely related to the characteristics and design of the topology maintenance protocol or algorithm. The factors that determine the role of the node include node density, location, communication traffic, packet loss rate, time, and external environmental conditions. If the node is currently in role 1, when an event occurs, the node performs a corresponding test to decide whether to enter role 2 or continue to be in role 1.