On May 28th, Beijing time, foreign media recently published a comparison between Google Glass and the Apple iWatch smart watch that people speculated will be launched. The article points out that the difference between Google Glass and iWatch is not only in the location of the wear, but more importantly, the former will provide a new computing model that allows users to establish a more intimate connection with the information domain.

In the upcoming "war" of wearable computing devices, the "war of giants" between Google Glass and Apple iWatch will be the focus.

Both Google and Apple are attacking on the "battlefield" of wearable computing devices, but the direction is completely different. So, which company will dominate? Of course, from the perspective of now, this war still presents a one-sided scene because Google Glass is already an actual product, although it is still only open to developers; compared with this, iWatch is still only a guess. . However, we may wish to assume that these two products will become real products in the near future, to see what their respective strengths and weaknesses. 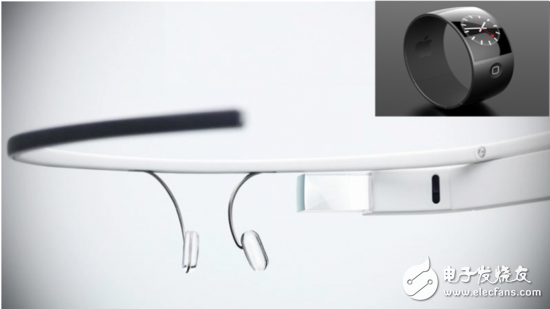 The comparison between Google Glass and Apple iWatch starts with the physical location, which part of the human body these two products are worn on.

iWatch: Wrists can easily become the target of wearable computing devices, since wrists have been the "home" of technological progress since the watch era in the 1920s, especially in the digital watch revolution of the 1970s It has reached its peak, and many people are used to wearing technology products on their wrists.

It is easy to imagine that by the time we can actually see the Apple iWatch, its specifications will surpass today's best smartphones. But behind the iWatch's halo, this product is actually just a transfer of advanced technology from people's pockets to the wrist, coupled with a smaller display. Or, a smart watch is nothing more than a satellite center for existing smartphones, which can display filtered notifications to people, and its touch interface can only provide limited interactive functions for people.

In addition, users still need to pull up the sleeve to see the display of the smart watch. On the other hand, when people don't use smart watches, they don't give people an awkward feeling.

Google Glass: Compared with smart watches, putting advanced technology on your face requires overcoming a much larger cultural barrier. If Google Glass wants to succeed, then people must get used to wearing a computing device on their faces and interact with other people who are also willing to do so. But unlike smart watches, Google Glass is not just as simple as shifting the position of the mobile phone display, but will provide a new computing model.

The unique benefits that smart glasses can bring to people include:

-Computing that truly liberates both hands;

â€”â€”Head tracking (can know where people are looking at);

Even the most complex smart watches cannot bring people the benefits mentioned above. In short, compared to any other wearable computing device (excluding devices that need to be transplanted), Google Glass allows users to establish a more intimate connection with the information domain.

Another important point is that in addition to the user â€™s natural perspective of the entire world, Google Glass can bring them more information. The relationship between the user of the smartphone and smart watch and the display is relatively isolated, isolating the user from the outside world; in contrast, Google Glass can provide a translucent display that overlaps with the real world The screen can bring users a seamless experience.

This means that Google Glass can significantly reduce the time it takes users to obtain information from files or the Internet, and it is more labor-saving. Although Google Glass is still only a prototype product until now, smart glasses with good engineering design can reduce the processing time of many tasks from 12 seconds to less than 3 seconds. It does nâ€™t seem to save 9 seconds, but the number of times people use smartphones every day is estimated to be 100 or more, which means that the total time saved is huge. In fact, Google Glass users can save 13 minutes a day and nearly 80 hours a year, which is equivalent to two weeks of workdays.

In addition, Google Glass can bring people a more labor-saving experience: when using a smartphone, people need to take the phone out of their pocket, press a few buttons, and then type; while using Google Glass, people only You need to look up to the sky and say "OK Glass".

As a result, information no longer dances at people's fingertips, but it is closer than fingertips. Google Glass can make information retrieval very smooth, so that it is perfectly integrated with people's consciousness; in an ideal situation, Google Glass will become a natural extension of the human brain and thinking process.

Google Glass still has a long way to go

From a practical point of view, Google Glass still has a long way to go to fulfill this commitment; however, if Google Glass can fully realize the concepts in the vision, then the benefits of this product will have real benefits Revolutionary. People may be reluctant to wear Google Glass for reasons such as social opinions and fashion factors; but will the benefits that Google Glass may bring overwhelm people's traditional beliefs that they are willing to use this product? It should be said that this possibility exists, especially if Google can successfully turn Google Glass into a coveted fashion product. And if Google can do this, then iWatch can only leave.

An Oil-Free Heater, also known as an non oil-filled heater, oil-filled radiator, is a common form of convection heater used in domestic heating. Oil-free heaters usually do not have fans to blow the heat into the room and office . The lack of a fan in an oil-free heater is what makes it silent and great.

so oil-free heaters are perfect and weightlight.