Skip to content
During the â€œThirteenth Five-Year Planâ€ period, China's power grid construction has experienced a period of rapid development, and its scale has leapt to the top in the world. At present, China has built six major inter-provincial power grids. The total length of transmission lines exceeds 1.15 million kilometers. Transmission lines of 500kV and above have become the main power transmission lines of various districts. China's territory is vast, its terrain is relatively complex, there are more hills and fewer plains, and the complex and varied meteorological conditions bring difficulties to the construction of trans-regional power grids and EHV transmission lines, plus after the completion. Maintenance and maintenance, relying on existing inspection methods and routine testing can not meet the requirements of high efficiency and speed, and can not achieve good results. The use of drone technology can well complete the power inspection and construction planning tasks, and naturally it can be recognized and applied on a large scale by power companies. 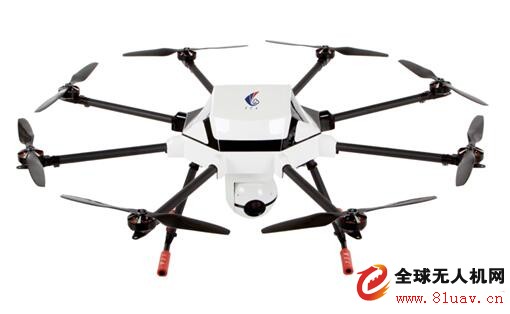 Tiantu Airlines M8FA Power Inspection UAV
At the beginning of 2009, State Grid Corporation officially established a drone inspection system. Tiantu is an early adopter of drone manufacturers involved in the power industry, and gradually develops electric drone products such as electric drive lines, transmission line inspections and power grid faults. Tiantu Electric UAV has high positioning accuracy and long battery life. It can take off and land vertically without any auxiliary equipment. It does not need special airports and runways. It has extremely low environmental requirements and can take off, land, hover, and anywhere in the wild. Before flying, flying back, flying sideways, hovering, etc.

Line maintenance and inspection have a very important role in the power system, which has attracted the attention of more power experts. Through the relevant data and image data, it can be clearly seen that the drone technology can play a very important role in observing the appearance of the equipment. Through the drone, the relevant personnel of the power department can clearly judge whether some important components are affected. Damage can also be judged very clearly, to ensure the safety of transmission lines and to protect the electricity consumption of residents. In addition to normal inspections and special inspections, the UAV can also be applied to the post-disaster fault inspection of the power grid. When a disaster causes roads to be blocked and personnel unable to inspect, the aircraft drones can play an alternative role, carry out transmission line inspections, accurately locate towers and line faults, and have a wider viewing angle, which can avoid "blind spots." UAV inspections increase the speed and efficiency of power maintenance and overhaul, enabling many jobs to be completed quickly with full power, 40 efficiencies than manual patrol. 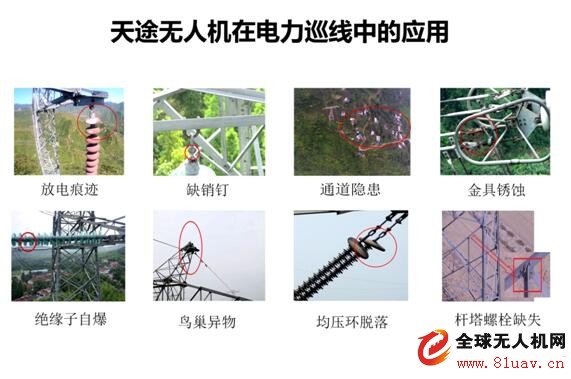 Tiantuo Power UAV can also carry a variety of mission loads, visible light, infrared camera, UV imager and photoelectric pods, etc., can work day and night. The infrared camera can detect the thermal fault points with strong concealment through the comparison of abnormal temperature changes. The UV imager can use the generation and enhancement of corona and surface partial discharge to indirectly evaluate the insulation condition of the running equipment and timely discover the insulation equipment. defect. The UV imager and the infrared camera are complementary technologies. Combined with the traditional visible light line, it can greatly improve the accuracy of fault detection and win valuable time for fault repair.

In the construction process of transmission lines, the length of the corridors and the terrain are complicated. The dense forests in the valleys and rivers in the areas where the lines pass, which brings great inconvenience to the erection of the lines, and the implementation of the project is very difficult. In order to effectively solve the contradiction between ecological environmental protection and overhead construction, it is easy to solve the problem by using the drone to display the guide rope to set up the line frame. The drone first flies over the line and applies a lightweight high-strength lead rope through each base tower, and then uses this lightweight lead rope to continuously pull the subsequent lead rope until a three-stage lead rope is pulled and the wire is erected. In this way, the high strength of the manpower display guide rope and the difficulty of landing the guide rope for the power parachute are solved, and the tree felling of the line passage is also reduced, thereby maximally protecting the natural ecology.

Tiantuo Power UAV has a high degree of intelligence, and can realize various advanced functions such as program-controlled autonomous flight and automatic returning. The operation is very simple and effective, with strong fault tolerance, stable and reliable system performance, flexible maneuverability and low operating cost.

Tiantu Power Discharge Robot has applied for national patents, Tiantu Power Discharge Robot, built-in robot, quickly removes all kinds of foreign objects on the wire, and can realize real-time troubleshooting under the charged environment. Utilizing drones in the power system to troubleshoot inspection lines, it also effectively reduces the cost budget of power companies, and also improves the efficiency of power inspection work, which is dozens of times the efficiency of manual troubleshooting.

UAVs have been widely used in electric power construction. From an international perspective, the general aviation industry represented by drones has become an important pillar industry in developed countries.
In the past eight years, Tiantu Airlines has taken a solid step and quickly grown into a national high-tech enterprise, and has grown into a specialized industrial drone that integrates R&D, production, sales, leasing, service and training into a whole industry. Chain service providers provide professional industrial drone products and services to industry customers (governments, institutions, and enterprises) in the fields of aerial survey, plant protection, security, power and logistics. Tiantu products have been sold all over the country and exported to the United States, Mexico, Japan, New Zealand, India, Peru, Cambodia and other countries and regions.

KNB2-63 Mini Circuit breakers, also named as the air switch which have a short for arc extinguishing device. It is a switch role, and also is a automatic protection of low-voltage electrical distribution. Its role is equivalent to the combination of switch. Fuse. Thermal Relay and other electrical components. It mainly used for short circuit and overload protection. Generally, According to the poles, mini Circuit breaker can be divided into 1P , 1P+N , 2P, 3P and 4P.