Skip to content
At 6 o'clock on the night of May 13, Sina Weiboâ€™s well-known account number â€œWorld's Most In Technologyâ€ released one of the following reports, saying that Tencent and Skyworth are preparing to make a big movie, which has caused widespread public concern. 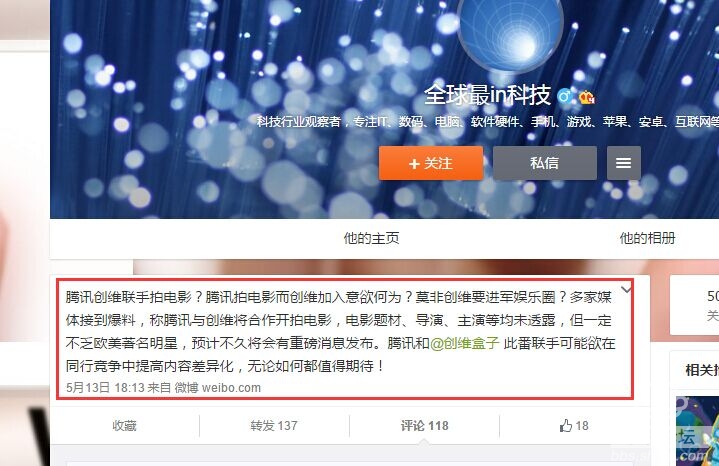 Weibo address: http://weibo.com/
Later, a number of media also received news that Tencent and Skyworth are preparing to work together to make films, but the specific movie themes and directors, starring, etc. were not disclosed. However, according to related sources, the audience will see European and American stars that are familiar to everyone, and it is expected that there will be more follow-up reports.
Tencent's filming I think is understandable, but pulling Skyworth makes people wonder if they want to enter the entertainment industry. Tencent ready to make a big movie? Or with Skyworth? Who is the legendary familiar face? Tencent and Skyworth's gourd in the end what medicine? In any case, these puzzles will always be revealed slowly.
There are also industry insiders who say that Tencent and Skyworth are the two strong teams that are likely to want to increase their content differentiation in competition with their respective peers. This is a good opportunity and challenge for both parties. Great action, people have to look forward to. Interested friends can also continue to follow our follow-up reports. Http://bbs.shafa.com/

solar &wind hybrid street lighting system have prominent advantages of compact design, energy saving and self-powering. In this system, wind turbine are complemented by solar power in supplying power for Led Lamp, as to its hybrid characteristics, which could provide a balance.It's advantages is that if rainy days,cannot use the sun power,then the wind power can work instead.It applies to the place where wind power is strong.